Category: 1. Know students and how they learn, 2. Know the content and how to teach it, 3. Plan for and implement effective teaching and learning, 6. Engage in professional learning Tags: blogs, English, RSA, Technology 1 Comment

This post is not about me using Genius Hour in my classroom for my students. I do use it, and in reflecting on using it, I have adopted some of the principles or habits that it promotes into my practice. These are notions of following instincts, experimenting with new ideas, using new paradigms and mixing up traditional classroom practices.

After reading this post by @paulbogush I decided to have a go at creating RSA style videos as part of my Technology teaching. The process described in the above post lends itself to the design cycle and it satisfies my need to use technology only when it enhances outcomes. The making of these videos requires analysis and understanding of concepts and content and as such does not exist as technology thrown on to a unit for the sake of it. Above all though, those videos are cool! I wanted to experiment with them. I was drawn to the process and felt passionate about incorporating them into my teaching.

So in planning how I would deliver this new concept to the Year 6s, I had absolute freedom. I teach the subject and thus these lessons to the entire grade, so I really could do it anyway I wanted. This was good, because I was finding it difficult to sequence. I initially wanted to integrate the unit with Science, and use the videos to explain the steps in a volcanic eruption or an earthquake, but that content seemed a little dry and uninspiring. If anything was need to jazz up the video process, it was the presence of creative thinking and so I decided that scientific content would not be the best option.

I went back to my Junior Primary roots and decided to use a Fairy Tale. My friendly Cybrarian pointed me towards a volume of tales and in true selective rigour I picked the first one – Little Red Riding Hood. I should also mention that I made this ‘content change’ five minutes before the lesson. So with my plan it tatters, I now  bring this ramble back to Genius Hour. I felt in that hurried morning an exhilaration (maybe a bit too strong a word, but it was very exciting) about my teaching. I literally bounded towards my classroom, thrilled about teaching this lesson, which I really did not have a plan for. Beginning teacher Mr Huebl, five years ago, would have shuddered at this thought and cowered at the notion of going into the introduction of a new unit with little more than a vague notion of where it was going. After all, if I didn’t reel the kids into this first lesson, I would be fighting uphill for the rest of the unit to keep them engaged.

What I found though, is that I was liberated. I knew the process that needed to be gone through to make the videos, and even though I had deviated from my plan, I was able to ‘make it up’ to an extent as I went along. I’m happy to say that it was a success and after lesson one, I have an engaged bunch of 11 year olds, even if just because it was a fascinating novelty to deconstruct a fairy tale. If only, I chose to integrate with English instead of Science!

So I refer to the process I went through as Genius Hour teaching. I went with my gut feel that the content needed to change, I was teaching a unit about a process that I had never seen before, I was out on a limb regarding my comfort level, but it all went well. I feel that the experiences my students have been going through in their Genius Hour learning have washed off on me – I was teaching what I wanted, the way I wanted to, and we all lived happily ever after.

A little help from my friends 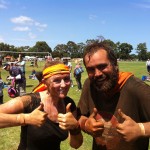 At times I am simply in awe of the support that I receive at the hands of my Professional Learning Network (PLN.) Far from the traditional make up of colleagues at my school, some uni mates and perhaps some lecturers, I count principals, administrators, teachers, academics, pre-service teachers and students, from all over the world as part of my professional support network. Twitter has changed the way I approach my learning as well as my teaching (See previous posts here, here and here.)

What my extended PLN allows me to do is to not only benefit from the wisdom of such a diverse population, but to in turn, be supportive of others. Giving to my tweeps (Twitter connections) is more beneficial to me than the support I receive from them. Very noble of me I know, but being in a situation where I know I have made a (positive) impact on a teacher’s practice (and their students, more importantly) is incredibly satisfying. The most satisfying of these situations is when I can see first hand the benefit I have given.

Recently I have really given the AITSL standards a great deal of attention. Our school is using them as the basis for its internal teacher mentoring, and being a new permanent member, my number is up. I have seen personal blogs set up to address the standards and in the spirit of learning from others (mostly from Jarrod Lamshed), I have shamelessly adopted the practice myself – the result of which you are viewing at the moment. My grade level partner Jade (on twitter here) is also adopting the approach, and needed support in the technical side of her blog maintenance. I of course, was happy to oblige.

I now am faced with the joy of seeing my colleague embrace the process that I discovered in turn from my PLN. This experience has reminded me that as participants in digital sharing, we experience the benefits of an extended PLN, but we must not neglect or regect traditional sources of support – our physical colleagues. The day to day, real time interactions that we can experience with co-workers will always, in my opinion, have advantages that an extended network cannot replicate. Physically observing enthusiasm for change, based on personal recommendations is a joy that I have no wish to lose.